Non-standard
This feature is not on a current W3C standards track, but it is supported on the Firefox OS platform. Although implementations may change in the future and it is not supported widely across browsers, it is suitable for use in code dedicated to Firefox OS apps.

This API is available on Firefox OS for privileged or certified applications only.

NFC (Near Field Communication) is a short range radio technology used to exchange data between mobile devices by tapping them together, or momentarily holding them close by. This article describes how to make use of the Web NFC functionality available in Firefox OS via the NFC API, including registering to use NFC and creating, receiving, and sharing data.

Note: The NFC API landed as a certified/internal API in FirefoxOS v2.0, however it had several design problems and possibly security issues, so we refactored it and made it available as a priviledged API in FirefoxOS v2.2 (bug 1042851). This documentation mainly covers the new version available in Firefox OS 2.2; for the Firefox OS 2.0 NFC API only P2P sharing is supported; you can grep the Gaia 2.0 source code for onpeerready to see how the API is used in Gaia apps there (Browser, Contacts, Music, Video, and Gallery.)

Note: These have not been updated to use the shared NFC Utils library to handle formatting and parsing NDEF data. New code should use NFC Utils as a basic starting point.

The contacts app uses NFC P2P Functionality for sending and receiving vcards. Look at gaia/apps/communications/contacts/js/nfc.js. In Firefox OS 2.2, there an app called nfc-api-test, which contains all the samples for using NFC API.

To use Web NFC, then first thing you need to do is register the nfc-ndef-discovered web activity in your app's manifest.webapp. For example, the following shows how you would use url as a filter for the Web Activity, if you just wanted to share URLs via NFC:

You can then set the activity handler in the standard way:

It's very useful to import the shared NFC Utils into your application. In your main HTML file, you can add this to your html <head>:

Next, you need to set permissions in your manifest.webapp, as required by the app's NFC usage. For full read/write permissions, you need this:

Or if you just want to share information but not write anything:

Note: In FirefoxOS v2.0 the permission was "nfc-read": {} and "nfc-write": {}, depending on what you wanted to do. The permissions were changed as of Firefox OS 2.2, to make the transition to privileged status easier (see bug 1048676.)

In this section we will cover possible ways to work with NFC tags.

Next, you need to read the MozNFCTag object — this is done using the MozNFCTag.readNDEF() method, which forms a request. onsuccess. This returns an array of MozNDEFRecord objects.

MozNDEFRecord is the object that implements NDEF — as defined in the NFC Forum specs. The data stored in the MozNDEFRecord object is raw data represented by an unsigned byte array ( Uint8Array ) , whereas the data received from the Web Activity handler is a JavaScript DOMString. Hence, conversion is necessary.

Writing data to an NFC tag

Here is an example of writing a URL on the NFC tag.

Sending data to peers via NFC

With your data ready to be sent, you can now get references to peers that come into range of your device, and choose to send them the data.

Registering the onpeerfound callback to react to peers

When the content is ready to be shared, you need to register the mozNfc.onpeeready callback, which will be called once another P2P device is in proximity.

When an NFCPeer comes into range, and your web app is in the foreground and has registered the onpeerready (needs nfc-share certified/internal permission) callback, the P2P Sharing UI will show the following: 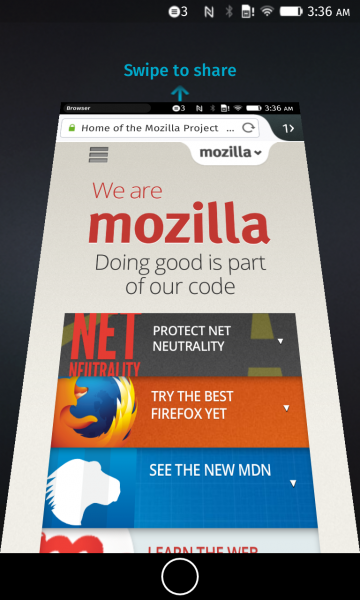 When a peer does come into range of your device , you can then get a MozNFCPeer object to represent the device receiving the data. This is done by grabbing the peer property stored in the event object, as indicated below:

Sending an NDEF to another MozNFCPeer

With your peer identified, you can now send the data to them via the MozNFCPeer.sendNDEF() method:

You can also send a Blob to your peer via MozNFCPeer.sendFile().

Once the blob has made it over to the peer, you can then use it in any way you like. Say the blob was an audio sample:

The NFC implementation in Gecko follows the NFC Forum specifications, as the current W3C NFC draft doesn't fit all the needs we have for our platform.

[1] Available in privileged apps as of Firefox OS 2.2; certified-only before that.